NEW My Younger Brother Wants to be a Husband 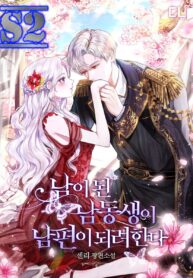 My Younger Brother Wants to be a Husband

My mother remarried and I had a younger brother.

With a happy heart, I tried to be a family with my younger brother, Millian. No matter how hard he behaved, it didn’t matter.

Did my effort shine?

I’m relieved that we’ve gotten quite close. Millian left a letter and went to war.

It’s been 5 years since Millian went to war.

[Millian, I’m going to see you this time.] Who knew my letter would end the five-year-long war?

“Now i’m not your brother anymore.”

Millian fluttered a document that he had been expelled from the family.

“Sister, don’t laugh at other men. Only if you don’t want to make me a murderer.”

My younger brother returned as a man.

It’s sad that he’s a someone else right now, but what?

He’s going to be a husband?

i shouldn’t do this.

My Lord of the Sea, Please Do Your Work!

I Will Take Responsibility for the Welfare of the Male Lead