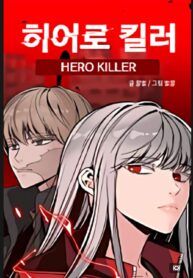 “Warning: Mature content: This manga contains materials that might not be suitable to children under 17. By proceeding, you are confirming that you are 17 or older.”
The war ended with the defeat of the villains. Now the world is ruled by corrupt heroes. And one of those heroes killed Yihwa’s unni. She doesn’t know which one, but that doesn’t matter. If she kills them one by one, they will be among them. Yihwa becomes the Hero Killer, a villain who hunts heroes every night. This one villain’s vicious action fight. “I’ll kill everyone, and take everything away!”

2021, 2021 Chapter 20 September 7, 2021 Chapter 47.5 September 12, 2021 Chapter 73.5 September 5, 2021 Chapter 84.3 August 27, 2021 Chapter 99 September 22, 2021 Cinderella Wasn’t Me – jimanga Cinderella Wasn’t Me Chapter 21.5 September 23, 2021 I’ll Be the Matriarch in This Life – S2manga I’ll Be The Matriarch In This Life Chapter 48 September 20, 2021 Into the light once again – s2manga Into the light once again Chapter 23 3 days ago Chapter 22 September 17, 2021 post_1886_image The Villainess Reverses the Hourglass Chapter 74 September 13, 2021 post_4168_image Devil Wants To Hug Chapter 84.4 September 3, 2021 TRENDS MANGA TODAY I Became the Wife of the Male Lead – s2manga I Became the Wife of the Male Lead Chapter 21 September 9, A Spoonful of Your Love, A Symbiotic Relationship Between A Rabbit And A Black Panther, Comics book, Crow Duchess, Drama, Elizabeth, Even Though I’m the Villainess, Fantasy, Hero Killer, Hotmanga, I Got A Proposal From A Villain, I Got Married To A Villain, I’ll Be The Matriarch In This Life, I’ll Become the Heroine!, Icy Boy & Tsundere Girl, If You Dare Lay A Hand On My Little Brother, If You Touch My Brother, Lady Scarlet, Manga, Manga Hot, manga new, Manganew, Manhua, Manhua-s2manga, Manhwa, Manhwa-s2manga, s2manga, The Man Who Cleans up Makeup, The Princess Pretends to Be Crazy, The Princess Pretends to Be Crazy - s2manga, The Raven Duchess, The Two-Faced Princess, The Villainous Princess Wants to Live in a Cookie House, Under the Oak Tree, Webtoons, Who Made me a Princess, Why She Lives as a Villainess, You're All Dead, You're All Going To Die, ヒーロキラー, 까마귀 공작 부인, 내 동 생 건들면 너희는 다 죽은 목숨이다, 두 얼굴의 황녀, 레이디 스칼렛, 악역에게 청혼받았습니다, 엘리자베스, 왕녀는 미친 척을 한다, 왕녀는 미친 척을 한다 - s2manga YOUR BOOKMARK 25929 Yue Chen Yin Chapter 100 September 22