HOT This is the Law 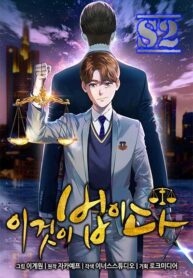 This is the Law

The genius lawyer Noh HyungJin’s justice-executing returner fantasy! Valedictorian of his University, perfect score on the Bar Exam, and even a 95% case win rate. Noh HyungJin was a so-called successful lawyer! While he was fighting against evil, higher powers to make South Korea a just and fair land, he was ruthlessly murdered by National Intelligence Service agents. “He shouldn’t have died…” Noh HyungJin was a man sent by Emperor YeomRa to fix corruption on Earth! However, after ending up in hell without having been able to achieve anything, Emperor YeomRa returns Noh HyungJin back in time… “I should at least give him power so he can protect himself.” What is this ‘power’ given to him by Emperor YeomRa? Will Noh HyungJin be able to change his future as well as the future of South Korea?!