NEW Sister I’m the Queen in This Life 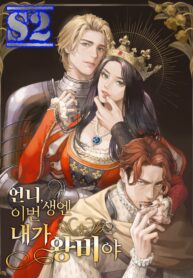 Summary: Sister I’m the Queen in This Life / Sister, in this life, I’m a queen / 언니, 이번 생엔 내가 왕비야 “He doesn’t like big girls. He always imagined holding me while holding you.”

The day before my queen’s coronation, my fiancé kicked me out. My biological sister, who couldn’t be more beautiful, mocked me for being tragically trapped in a tower.

“I was a replacement?”

My fiancé, who was perfect for my question, distorted his face and laughed.

“You’re a substitute. You’re not even a replacement.”

I’ll go back and change everything.
Abominable sister, cruel fiancé, stepmother who exploited and pillaged me, half brother and biological father!
I won’t leave you alone! I’ll drink blood and rip off the flesh!

There is no more nice and sweet second daughter.

“Don’t cry, Ariadne. You deserve better than that.”

Even the fiancé of a past life whose attitude has completely changed.

I’ll see the end of this story!

Ariadne, who was born by the cardinal’s ordination. This time, she is throwing himself into a political frenzy to win both love and power.