NEW It’s Useless to Hang On 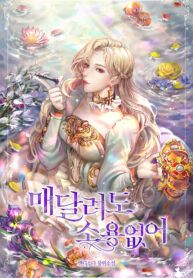 It’s Useless to Hang On

The love of my life, Rakan, became the Emperor. At last, the coronation ceremony; I stood by him expecting to become Empress. However, the crown of empress didn’t become mine, it became Vienna’s, my younger cousin.
I threw everything away to make Rakan the emperor, and all that’s left for me ahead was death. It wasn’t until I was abandoned that I realized he used me. Everything was a ruse. The carefully planned screenplay; its main characters being the love of my life, Rakan, and my cousin, Vienna. I was the only one who didn’t know that. In my last moments, I made a promise. If I had another chance, I wouldn’t love you again, even if I died.
I’ve miraculously returned to the past! To when I was 18, the day all the disharmony began.
I made up my mind in tears. This time, I’m going to give everything I’ve got to destroy you, Rakan. In my vow of revenge, I began to see something I had never noticed before. My fiancé, Paylon, has always looked my way.
“Please be on my side. I don’t need love.”
I’m not going to let you hang on to me this time!

Prince, Don’t Do This!

No Longer A Heroine!

But My Daughter is Just So Cute!, Comics book, Drama, É inútil esperar, Fantasy, Hotmanga, I’m Only a Stepmother, It’s No Use Hanging On, It’s Useless to Hang On, Kill the Villainess, Manga, Manga Hot, manga new, Manga Trending, Manganew, Manhua, Manhwa, s2manga, The Lady Wants to Rest, There’s No Use in Hanging On, Under the Oak Tree, Webtoons, 매달려도 소용없어