NEW I’ll Twist The Neck of a Sweet Dog 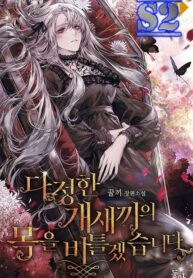 Chloe Garnetsch, who gave everything for the man she loved, but eventually died miserably.
Foolish Chloe realized too late.
She was a bait for a man to throw at the emperor, and a man was a beautiful son of a bitch disguised as tenderness.

Seventeen I was just as young and immature as I could not hide my growing heart.

My body shuddered at the sight of me looking over my body with my chin on my back, but I plucked up the courage and took a step closer to him.

His fingertips swept down my face.
Despite the unexpected confession, he was overly relaxed and adept.

“I like you too, Chloe. I’m in love.
How can I not be pleased with you, who will bring me your brother’s neck in the future.””

The man I was in love with was so sweet that he was even crueler.

“Give birth to the Emperor’s child.”

When I opened my eyes again, he looked down at me with a pale face.
A man who trampled on my love and destroyed me.
a reason this deserves translation:
Really interested in how the female lead takes revenge.
In this story the female lead was raised by the grand duke and loved him, but he used her love and asked her to give birth to the emperor’s child, after she did she was betrayed, the grand duke became the emperor and her child was kidnapped and she died tragically. Then she went back in time before her night with the emperor and she will take revenge on the grand duke who betrayed her and used her, apparently he was regretting. I have a guess that the emperor may be the male lead.

Life of a War Emperor After Retirement