NEW I Refuse to Be Executed a Second Time 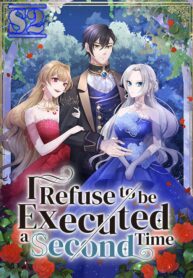 I Refuse to Be Executed a Second Time

Summary: I Refuse to Be Executed a Second Time / 2度目の処刑はお断りです / 2-Dome no Shokei wa Okotowari desu

Ella Walker looks back on her life atop a guillotine. She was forced to cancel her engagement with Prince Gil in favor of her stepsister Isabella and demoted to rule a desolate hinterland. Then, the resulting riot leads to Ella getting executed. But after the execution, she somehow ends up reincarnated ten years into the past. Having been given a chance to do it all over again, Ella is determined to live her new life freely, without being tied down. She gives up her spot as Prince Gil’s fiancee to Isabella and decides to work hard to reform the hinterland as its new lord. But fate’s guillotine doesn’t leave Ella’s throat, with the blades of many trials to come threatening to stab her. Can she escape her destined death and obtain happiness…?