NEW How can a time-limited evil gain her vengeance? 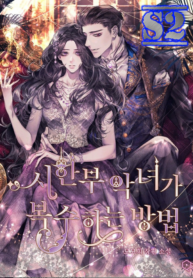 How can a time-limited evil gain her vengeance?

I just wanted to be loved.
After awakening the power of an alchemist, he constantly made gold for his family on the verge of bankruptcy.
Even though I know it’s a life-saver.
But when she died of attempted murder, no one was with her.
Wearing the dress bought with her life, the younger sister shed false tears in the Crown Prince’s arms.
The third awakening accomplished by being pecked by a bird’s beak.
Milvia got her hands on the time.
Returning to the past, she has only one year left to live.
I will take revenge in it.
So I spent the night with a man called a mad knight. A man who had only been given the baron title now.
The only price for giving her unimaginable wealth is to keep her by her side and pretend to love her.
I will give you everything my family originally had.
Just don’t let me fall apart while I get my revenge.
…… But why does a proposal come from a peasant family that is said to dominate the dark district?

How can a time-limited evil gain her vengeance?

“Do not be discouraged, for you are worthy of your own praise.”
He gently strokes his cheek with the back of his hand. It was the firm hand characteristic of the one holding the sword.
The moment when he suddenly felt that he was a ‘man’.
Milvia’s face heated up to the point that it felt like it was too much.
“I hate hypocrisy very much.”
Deius pressed his thumb to her lower lip and rubbed it in a strange way.
Milvia froze, unable to breathe, and was bound by his gaze.
“Don’t pretend to be good, pretend not to give up. The truth is, I want to live if I can live by killing others.”
His words became a dagger and pierced his heart.
Knowing that her breath was trembling, Deius did not stop talking.
“Tell me you want to kill me, Milvia.”
“……”
“If you say that, even if I kill the saint, I will save you.”
His whispering smile was terribly seductive.

…… To the point where I really want to live.

A Symbiotic Relationship Between A Rabbit And A Black Panther, Be Patient My Lady!, Come On!, Comics book, Drama, Elizabeth, Even Though I’m the Villainess, Fantasy, Hotmanga, How can a time-limited evil gain her vengeance?, I’ll Be The Matriarch In This Life, I’ll Become the Heroine!, Lady Scarlet, Manga, Manga Hot, manga new, Manga Trending, Manganew, Manhua, Manhua-s2manga, Manhwa, Manhwa-s2manga, Oh, Oh Be Patient My Lady!, Oh Come On!, s2manga, s2manga - Under the Oak Tree, The Villainous Princess Wants to Live in a Cookie House, Under the Oak Tree, Under the Oak Tree s2manga, Webtoons, Who Made me a Princess, Why She Lives as a Villainess, 레이디 스칼렛, 시한부 악녀가 복수하는 방법, 아, 아 쫌!, 아 쯤 참으세요 영주님!, 엘리자베스, 쫌!, 쯤 참으세요 영주님!