NEW Even the villain is annoying 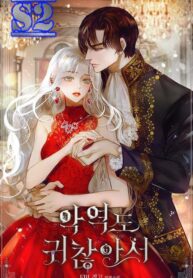 ven the villain is annoying / 악역도 귀찮아서 / Resigning as the Villainess

Even the villain is annoying

Summary: Even the villain is annoying / 악역도 귀찮아서 / Resigning as the Villainess

Why It Should Get Picked Up: Its Manhwa is scheduled to be launched in the second quarter of 2022.

Description (mtl-ed):
Versace family! A place that produced many swordsmen and possessed a powerful force.

Such a family perished.

Due to the poisoning of the Crown Princess in the involvement of a foolish woman named Olivia de Versace.

She was a woman who was pointed out as a rare ugly or evil woman because of her tall and heavy body.

I was absurd when I was possessed by a novel that is often referred to as a novel.

If you’re going to pretend to be a female lead, or something. or the male protagonist. Anyway, shouldn’t it be a small supporting role? Even if it wasn’t, I shouldn’t have given the passer-by’s appearance like this.

The Return of the 8th Class Magician

I Was Raised By The Boss

A Spoonful of Your Love, A Symbiotic Relationship Between A Rabbit And A Black Panther, but I Won't Harm You, Comics book, Don’t Touch Me, Drama, Elizabeth, Even Though I’m the Villainess, Fantasy, Hotmanga, I'm a Wolf, I'm a Wolf but I Won't Harm You, I’ll Be The Matriarch In This Life, I’ll Become the Heroine!, I’ll Protect the 2nd ML’s Love, Lady Scarlet, Manga, Manga Hot, manga new, manga new ✔️ Read Manga |, Manga Trending, Manganew, Manhua, Manhua-s2manga, Manhwa, Manhwa-s2manga, Resigning as the Villainess, s2manga, The Man Who Cleans up Makeup, The Two-Faced Princess, The Tyrant’s Tranquilizer, The Villainous Princess Wants to Live in a Cookie House, Under the Oak Tree, ven the villain is annoying, Webtoons, Who Made me a Princess, Why She Lives as a Villainess, Your Highness, 늑대지만 해치지 않아요, 두 얼굴의 황녀, 레이디 스칼렛, 서브남의 사랑은 내가 지킨다, 악역도 귀찮아서, 엘리자베스, 폭군의 신경안정제