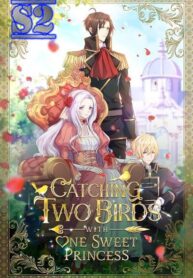 Catching Two Birds with One Sweet Princess Average 2.7 / 5 out of 63

After awakening in a webnovel as Princess Clara, this former office worker isn’t getting the royal treatment. As the shy sister of the tyrannical King Bastian, she’s immediately faced with disdain and so much drama! Plus her character’s destined to be seduced by his latest hostage, Crown Prince Daniel, accused of betrayal, and executed. But Clara’s got a backbone and a plan to win over her brother. She’s ready to take control, slap some sense into meddling nobles and servants, and resist the charms of her handsome (really handsome) charge!

My world legion of Doom