NEW One Step Forward to the Flower Path 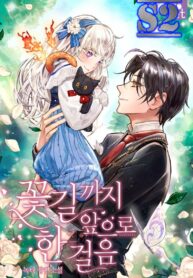 I lived my whole life being used by other people and died at the age of 16. I thought it would be over like that, but when I opened my eyes again, I was back in the past. I thought I’d die while living the rest of my life in pain one more time.

But suddenly, a father who I had never seen before appeared before me. My dad, who I didn’t even know existed.

“When are you going to take away my powers?”

“Everyone did. You, when will you take it?”

Ivanna couldn’t understand. Everyone coveted her power. Everyone wanted it, saying she was a sacrifice sent by God for humans.

So why does he refuse?

“No one will take your power now. No one will bother you. I’ll protect you.”

“You’re trying to take my power.”

“Everyone said that and stole my power from me. They locked me up in prison.”

It was too cruel for a mere five-year-old to say. But the young Ivanna’s face had no emotion as if what she said was natural.

Faking It In Style