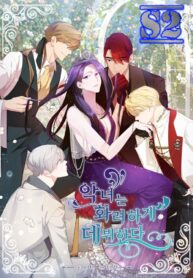 The Villainess Debuts Gorgeously Average 4.1 / 5 out of 40

약녀는 회려히게 데뷔한다/The Villainess Debuts Gorgeously Although she was born as a noble princess, her life was abandoned by her fiancé and betrayed by her family. “I don’t need to live kindly, I will live more splendidly than anyone else. Even if that’s called a wicked woman.” After her return, the prelude to her vengeance was to kneel before her cheating fiancé. But before long, “Princess! There is so much gold, they say, that the Royal Bank’s warehouses are running low!” “Princess! Every country is clamoring to serve the princess!” “Princess! Oh my God, the Emperor of the Empire has come to visit!” The world kneels before Erdella

I Accidentally Saved The Jianghu’s Enemy

Hero? I Quit A Long Time Ago.

Let Me Fall Be Brilliant