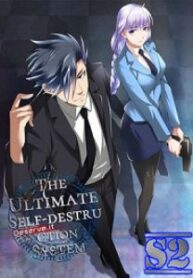 The Ultimate Self-destruction System Average 3.5 / 5 out of 2

A catastrophe known as “Data Crash” struck the earth in 2020. Survivors rule the game, and losers are erased. Jacob Wei, a senior player, happened to fail despite surviving many rounds. Surprisingly, he was taken back to the beginning of the crash and was reborn with the incredible Self-Destruction System. Now he earns points from his stupid acts, triggering self-destruction in order to be reborn. Each revival makes him stronger. Thus unfolds the story about how he starts over and makes his way to the top.
The Ultimate Self-destruction System / The Strongest Death System / Strongest System

Rebirth Of a Cute Wife

The Princess Wants to Die Comfortably

The Way the Mage Faces Death