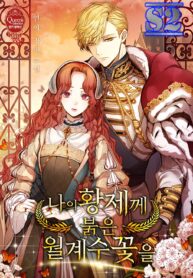 Red Laurel Flowers To My Emperor [ Webtoon Version – The unparalleled daughter of a god of war, Loel Neares, the first princess of Tortia. She lost both her parents and got married as if she was being sold to the enemy country Kairos. But it was all her ‘choice’. First night with Emperor Kairos. “I will offer you my homeland, the Tortias of the North.” She told Ethan Kairos, the golden-eyed emperor in front of her and offers a risky ‘trade’ ]

The protagonist of an oracle that is said to bring unparalleled prosperity to the empire. Emperor of the Golden Empire Kairos, Ethan Apolius Kairos.
A pitiful new bride has arrived, who will not even be able to receive a glance from this golden emperor.

Princess of the Dawn of Tortia, the country of the red nation, Loel Neares.
The only way out of her imprisoned castle is to marry a foreign emperor.
That’s what she heard on her first night with Emperor Kairos.

She was a princess who had been sold to Kairos without anything she had.
The hand she brought out was,

“… … I dedicate to you Tortilla, my homeland and the protector of the north.”

It was enough to attract the emperor’s attention.

The End of this Fairy Tale is a Soap Opera