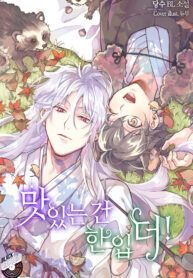 White serpent masquerading as an Imugi x Joyful raccoon that can’t stop eating
Halfway up the Crescent Moon Mountain, where humans avoid due to its rugged terrain.
The white serpent monster Ishimi, was rudely awoken from his hibernation by the raccoons that suddenly appeared. In his rage, Ishimi chose to masquerade as an Imugi and bully the most annoying of the raccoons.
But he didn’t know that the raccoon was a monster like him, and could turn into a human form.
The raccoon monster Sokuri, was living with the gaze of raccoons that saved his life.
He had always got into trouble because of his insatiable appetite, but provoking an angry Imugi turned this situation into a deadly one. To repent for his interruption of the to-be dragon’s holy sleep, he has to procure him some food, but the reasons behind it seem a bit suspicious? And he keeps requiring his attention for some reason?
The union of the liar snake Ishimi, and the cheerfully gluttonous raccoon Sokuri.