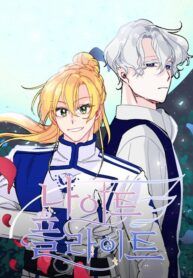 Amadeonte Elvin, the legendary swordsman of the Elcano Kingdom and the first woman to join the Royal Guard, and Cyonel Gavadien Meon, the prince who is entangled in a struggle for his succession to the throne and is hated by his own father. Two really different people who share one common goal: to escape the country. Will they be allied or enemies?

Grace of the Crown Prince

I’m a Martial Art Villainess but I’m the Strongest!

Rebirth Of a Cute Wife