HOT My Lord, the Wolf Queen 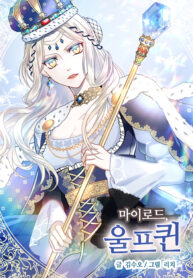 My Lord, the Wolf Queen

Determined to rebuild his defeated country, Prince Kang Joon begs to be taken in by the powerful empress of Skaden, Roselin Skadia II. But never did he imagine he’d be her war trophy, spending night after night in her bed! That is until one fateful day when Joon uncovers Roselin’s shocking secret. Now that he knows the truth about her, what lies ahead for their relationship… and their kingdoms?