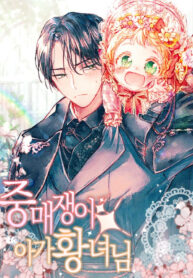 I woke up as the orphaned princess Eryl in a novel! My lovely aunt Lucinda, who suffers from raising me alone, is as kind as an angel. Though it doesn’t appear so in the eyes of my uncle, tyrant Emperor Tessa Illuminas. “Aunt, only trust in me! I’ll make you walk on a flower path!” Eryl enters the imperial palace only for her aunt. But this uncle doesn’t seem like the tyrant in the novel at all? Rather, it just seems like there’s a lack of affection? “I can’t help it! Eryl will make everyone happy!” Nowadays, children play matchmaking as a hobby, right? I’ll try it out.

This 3-Year-Old Is a Villainess

Princess is a Bloodthirsty Surgeon