NEW I was born as the Demon Lord’s daughter 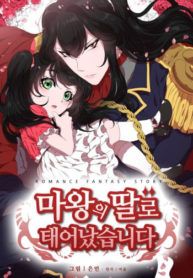 I was born as the Demon Lord’s daughter

Joara lived and died miserably, but as her life ended she realized that she was reborn as the demon lord’s daughter? Joara lived as the school’s loser and while running from her aunt’s physical abuse she got into a life-ending car accident. After nearly dying at the hands of her new father, the newly named “Irene” starts a new life with her father’s familial love and adventure!