NEW I Became the Wife of a Tragedy’s Main Lead 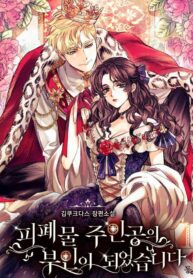 I Became the Wife of a Tragedy’s Main Lead

Living alone as an abandoned princess of the Kingdom of Anzak, I discovered I was in fact in a trashy novel that appeared in my dreams one day. My half-sister was the novel’s heroine, while the male lead was well-known to be cruel and heartless. I was just an extra who died before all the drama started. Sold as a scapegoat for the Halvenkia Empire’s peace treaty, I was destined to die, unable to escape my fate. “I’m the only man in Halvenkia who’s still single. Don’t you fancy me?” But all of a sudden, the main character wants to marry me. Your first love, first kiss, and first fling are all with the heroine, but could I take them all for myself? Alexia, struggling to alter the story in order to survive. Tervion, wanting to keep her all for himself. And Ophelia, the unknown heroine. The original story has now begun to flow in a completely different direction. This is romance fantasy which covers Alexia and Tervion’s dreams and fantasies, as the only ones in each other’s eyes.

Romance With My Boss

But My Daughter is Just So Cute!, Comics book, Drama, Fantasy, Hotmanga, I Became the Wife of a Tragedy's Main Lead, I Will Change The Genre, I’ll Be The Matriarch In This Life, I’m Only a Stepmother, Manga, Manga Hot, manga new, Manga Trending, Manganew, Manhua, Manhwa, s2manga, The Sacrificial Princess, The Way to Protect the Female Lead's Older Brother, Under the Oak Tree, Webtoons, When the Villainess Loves, 피폐물 주인공의 부인이 되었습니다