NEW How To Stop The Tyrant’s Blackening 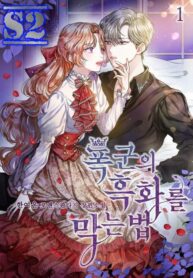 How To Stop The Tyrant’s Blackening

She became an extra member of the Blackmak family, who blackened the emperor and turned him into a tyrant.

The darkened tyrant is obsessed with the female lead and becomes a good villainous sub-male lead.

Of course, what about me before that?
I die after being used only.

However, I didn’t know this death would be repeated three times.

How to break the cycle of tedious regression?
Let’s stop the blackening of the tyrant.

“Do you believe in Tao?”

A gaze that looked like a worm came back.
I know how it feels. I was like that, too.

“I can’t even sleep well these days!”

Flinch. She stopped walking, trying to ignore it.

“My mind is blank. My heart is pounding like crazy. Don’t you think your head is going to explode? ”

Under my eyes, a perfect man looked at me even if he had dark circles.

Of course, just trust me.

Empresses in the Palace

The Dignity Of Romance