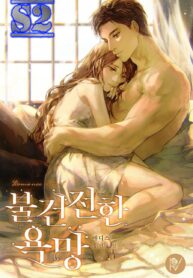 As a lonely orphan and a corporate heir, the lives of Seo Yeonwoo and Lee Seokheon couldn’t be any more different. Due to this, Yeonwoo has been unable to refuse Seokheon’s advances to be his sex partner. But as Seokheon’s grandfather was the one to take Yeonwoo in when she was orphaned, the guilt of sleeping with her savior’s grandson weighs heavily on her mind. She finally draws the line when Seokheon pulls out a wedding ring, professing that he’s willing to go against his parents’ wishes and marry Yeonwoo. No longer wanting to become a burden to Seokheon’s family, Yeonwoo decides to pack her bags and run far away. But just when everything seems okay, Yeonwoo learns that she has an unexpected baby on the way…
Associated Names
Unhealthy Desire
Unwholesome Desire
불건전한 욕망

The Tyrant’s Only Perfumer

A Spoonful of Your Love, A Symbiotic Relationship Between A Rabbit And A Black Panther, But I'm a Chaebol, But I'm a Conglomerate / 이혼당했지만 재벌입니다 / I'm Divorced, Comics book, Crown Prince!, Destructive Desires, Drama, Elizabeth, Even Though I’m the Villainess, Fantasy, Hotmanga, I Got A Proposal From A Villain, I Got Divorced, I Got Divorced But I'm a Conglomerate, I Got Married To A Villain, I'm Divorced But I'm a Chaebol, I’ll Be The Matriarch In This Life, I’ll Become the Heroine!, Lady Scarlet, Manga, Manga Hot, manga new, Manga Trending, Manganew, Manhua, Manhua-s2manga, Manhwa, Manhwa-s2manga, Please Cry, Please Cry Crown Prince, s2manga, The Man Who Cleans up Makeup, The Two-Faced Princess, The Villainous Princess Wants to Live in a Cookie House, Under the Oak Tree, Webtoons, Who Made me a Princess, Why She Lives as a Villainess, 두 얼굴의 황녀, 레이디 스칼렛, 악역에게 청혼받았습니다, 엘리자베스, 울어주세요, 울어주세요 황태자님, 이혼당했지만 재벌입니다, 황태자님!